There is a rocky beach where the Eagle River is still shallow where the mountains bend the water through a narrow strip of land falls.   For reasons that I don’t think is the obvious, they call this place “Echo Bend”.  The hike to this place, is 3 miles one-way, and that from a nature center 10 miles from the town of Eagle River and another 15 from Anchorage.  It isn’t “off the grid”, but its not “on the grid” either.  If you been reading my blog for a while, you may recognize the name — because I made a big post about it some time ago:

That first time I visited, Echo Bend it was incredibly symbolic to me.  This peaceful, serene, and the nearly untouched plot of land remains one of the most beautiful places I have ever hiked to; and the fact that it was just a short drive away made it on a different level.  It’s like if you found out you lived next door to Steven King, and you could stop by anytime so that he could tell you a story.

But visiting Echo Bend is easier said than done.  The three limiting factors in my life all worked against me to get back.
1) The weather – its rugged country, and no one plows the trail to get there.  Maybe it wasn’t so bad, because there was no sign of back country ice or snow, but the other two excuses came in …
2) The Pup – before today the furthest he walked was about 3 miles.  He is a pup, you know.  The first time I visited there was the day after he was a born.
3) My fat ass – I probably put on a good 50-60 lbs since that first trip, and while I have been fighting to get myself back into hiking shape the last couple of weeks this was going to be a challenge – I felt like I was dying the last time I did the trip.

To be honest, I knew this was going to be a significant test for me, but I needed to see if I could get back to this place.  It’s bear country, its 6 plus miles of hiking for both me and the pup, and it was going to be hot – 70°F Plus … a scorcher on Alaskan standards.  The hike did in fact stretch us.  I packed too little water, forcing the pup to drink from the river which made him a little sick.  He also struggled once he got tired to maintain his leash work, pulling to much, way way too much.  The last mile to and from Echo Bend, the trial is less of a dirt path, and more jagged rocks and rock hard roots which will make my knees, ankles, hips scream by tomorrow morning.

But we made it. 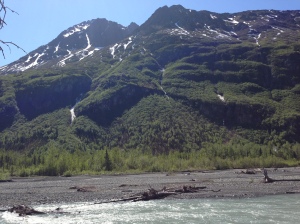 We took the time to hang out at the bend before heading back.  We needed the rest for one thing, and it was too tough to pass up.  The spot was actually busy today.  Mostly, it seems, with people who made me feel embarrassed to struggle so much to get there.  I mean, the college aged kids weren’t much of a surprise, but the girl who made the hike in blue jeans and cotton sweatshirt (not at all backwoods hiking approved) made me wonder why I was sweating.  The deal breaker was when the young family arrived. with the 2 year old girl arriving tirelessly at the side of her mom … her pregnant mom (pregnant and out hiking me?  seriously?).

I got to tell  you, though, it is near impossible for me to forget this place.  It’s the first part of Alaska that I felt truly disconnected with the city life.  No cars, no planes, no buildings.  Besides the wood sign, the half-barrel fire pit with Budweiser cans in it, and the well worn trail, there is little else to see the effect of man.  This is peace, this is separation.  And while it nearly killed me, it seemed, to get to this spot, I didn’t mind it as much.  I joke about what could kill me in Alaska, but if I do get mauled by a bear or stomped by a moose, I would want it to happen here, at Echo Bend, and let whatever is left of me to run down river and out to the world beyond.

In the meantime, I can fall back on those words I wrote back in September.  That this place remains beautiful and can call me back at will.  And today, I proved I can come back whenever I want.