A few minutes ago I made the next big change to my life happen.  While the decision was one that took a long time to make, it can be summed up by a statement made by Jenny McDonald (aka Jenny Poopie):

I just committed myself to becoming a new owner of a Staffordshire Bull Terrier.  This began late last week.  A co-worker, Mickela Lamb, pestered me a bit about a puppy she heard about.  She’s going to get her hands on a pup herself next spring when a litter comes along and she will be in a better place to keep it, but the breeder had some pups they were looking for good homes for.  Since I mentioned I kinda wanted a dog and the house was about mine … she sent me this: 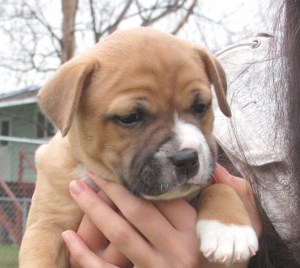 Mickela and I swung by on Saturday to meet the little guy, his parents, his breeder, and just get me started with loads of questions.  He isn’t weened yet, so he is still some time before he is ready for me to take him.  Which is good, because I need time to get ready — like read books, buy stuff, and get myself dog ready.

The pup is a pure bread Staffordshire Bull Terriers (or staffies). If you google them (here, let me:  http://en.wikipedia.org/wiki/Staffordshire_Bull_Terrier) you find staffies are sort of like pit bulls but not in any bad way.  They are athletic and sturdy, bigger than wussy toy dogs but smaller than big sloppy things.  Where they differ form pit bulls is their attitude … differ alot.  The breeder told me “don’t expect them to be a security dog, because they love all humans … even strangers trying to break into your house”.  They are social and want human attention.  They like other dogs but can be trouble around dogs looking for trouble.  Breeder again said “they don’t start fights with other dogs, but they are determined to finish them”.  The trick is going to be making sure I make the time for him.  Most of my research was trying to figure out what would happen if I leave town and who could watch him.

For the record, I don’t have a name, and will have to think of one quick.  Tomorrow (ironically immediately after I pick up the keys to my new house) I show up and finalize the deal, and spend a bit of time with him.  He is weening still, and won’t be able to pick him up for a couple weeks.  I may get some bonding time over the meantime, when I can at least.  As it turns out, I am going to wait until after going to Lake Geneva for Cousin Ted’s wedding … and will pick him up on the anniversary of the invention of the flux capacitor & the day Guy Faux tried to blow up the English Parliament (depending on how much you know me … you will get what this day will mean).

So, that’s the next big decision.  It was quite big for me, but … as it turns out … the big decision was for something quite small.

4 thoughts on “The Next Big Thing is Small”